Different people are involved in the process. The bug fixing process works best when it has individuals from different companies work on the code so that fresh eyes and fresh perspectives improve our work.

This poll might help you decide what to work on first. 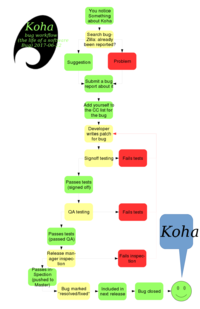 A basic workflow diagram of bug patching in the Koha community