Things to details more in the workflow

Start by creating a sandbox. And without filling the bug number field. Because most bug test plans start without patch to check that the bug is still there. And this allow to immediately start the creation of the sandbox. So that while it's being created, one can pick a ticket to test. 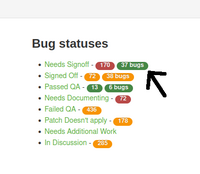 Check if it's testable in a sandbox.

Look if the test plan mentions running a command, if yes: skip. Simple but will miss a number of testable tickets. Not a problem when the pile of tickets needing testing is big. Get the low handing fruits before you will gradually become familiar with the points in the next section.

List of stuff we can actually do in sandboxes:

Find the right (up to date) test plan: Attachments section => click the date of the 1st listed attachement to make the page scroll down to it.