This page is to keep track of our ideas for adding achievements/game mechanics to the patron experience of Koha.

We could also gain a lot by adding this element to the staff side of things. That's going to be the topic of me KohaCon preso. Just think of the cataloguers! ;) -- BWSJ

I'm thinking of a system to create either public or private library achievements or badges based on library circulation and item data. The system would be opt-in only. (I like Karma better than "achievements" as Karma has inherent non-competitive transcendent coolness, whereas "achievements" reeks of competition. Don't we want to encourage the inner coolness of patrons rather than engage them in a trite game? Why Badges? Does the score have to be public? I was thinking that Karma could be it's own reward and/or be converted to some xtras like xtra holds, additional renewal etc?)HB

The ability to display "most decorated patrons" on the front page of the OPAC might be cool too. ++

As always, we need to be careful to include sound and such so that blind folks can join in. Surely we have friends like SH that can test for us. There are also cultural things to consider. --BWSJ

I want to help with this quite badly. I have been a gamer since the days of lode runner, so I has cookies. --BWSJ

Dude! Mozilla has totally done like a lot of work for us :D Checka, checka, check it out! Open Badges 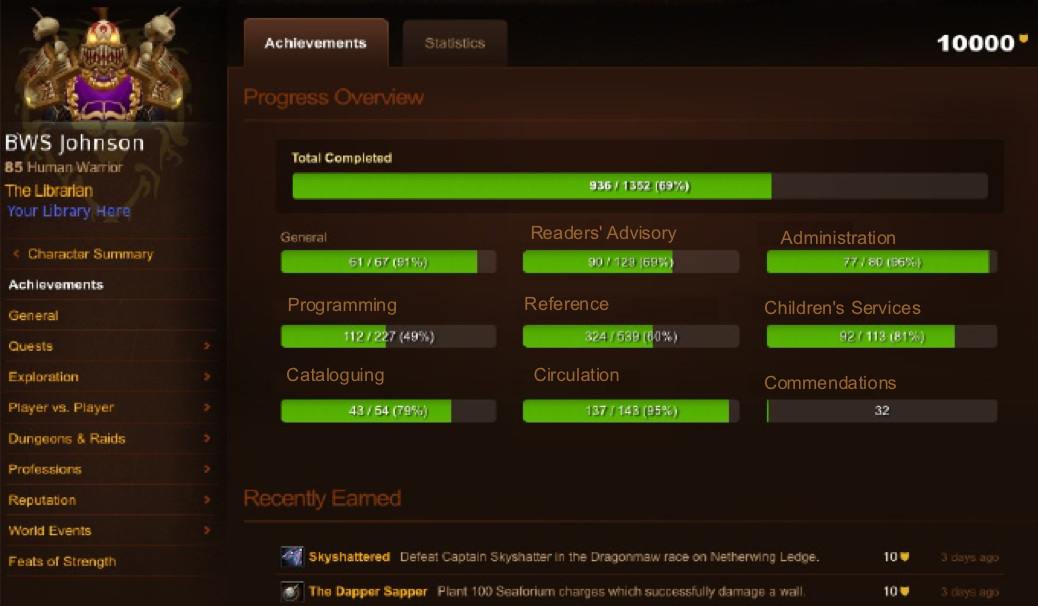 This was a slide from my KohaCon2011 talk. We can't just wholesale Blizzard's ideas, but the text categories are what's important here. I thought about what I would break a Library into from the staff side of things, and came up with these categories.

Categorisation and a summary of it is nice so folks can see at a glance what sort of user they are, and where they might avail of services they don't currently utilise.

Summat to keep in mind is that we need a nice blend of easy to get achievements coupled with some harder to earn ones. In WoW, the really hard ones get a virtual reward associated with them: a Title, a non combat pet, or even a mount. Perhaps it can escalate from low numbers to higher numbers, but also have beginning interactions (such as circulation) morph into more advanced activities like advisory through tags (recommended 10 things which other users found useful)

Achievements should have funny or descriptive titles. A few examples:

Example acheivements (of course there are infinite clever spins on all of these, probably thousands of acheivements in each category):(HB thinks these should be pared down -see above)

I'm wondering if it would be a lot of overhead to process all of this at actual check in/check out time. Circ speed is important, so maybe we need to compute achievements asynchronously via cronjob and email patrons the results (if they are opted in) useful link http://stackoverflow.com/questions/2600701/an-achievement-system-like-here-on-stackoverflow-in-php.

rather than write it all up ourselves, something like http://iactionable.com/ might be useful as well. (This is true of many different things we could roll in. There is a lot in the way of "Hey, let's integrate this" instead of "Hey, let's write this from scratch." GT System comes to mind.)

It might be nice to have an interface for libraries to be able to define their own achievements, much like the report wizard. The ability to export and import badge definitions would be cool too (Like the frameworks). -- Definitely! This could be extremely popular, just like reports, and just like reports, I think it would be nice if there were like a "quick share" button so that things could be auto fed into bugzilla to be tested as enhancements without Librarians screaming for the hills about bug processing. -- BWSJ

Make it possible to...

Public profiles in the OPAC

Opt-in only, of course.

Could we distinguish between profiles that are completely open to anyone, and having them just open to others that are logged into the same OPAC?

Things we could consider displaying (probably best if we let the user choose which ones should be turned on or off? lr: I think they should all be available privately to the patron.):

Have to be able to have users self organise into guilds. Just. Have. To. (this to me is the stuff of madness HB)

Suggestions for libraries using this feature

Examples in the wild