The current circulation rules system in Koha has a few major issues:

We propose solving these issues with a new, more flexible backend and a more intuitive interface on top.

To allow for more flexible specification of policy, a new table structure will be created. Instead of a single row per itemtype/branchcode/categorycode with columns for each policy value, we’ll use the following:

Right now, Koha selects groups of rules by the combination of branchcode, categorycode and itemtype. So, given these three criteria, we currently return all rules (loan length, fines, etc). The subroutine that does this is named GetIssuingRule.

The first iteration of the new solution will recreate this style of rule selection by fetching each rule separately, then combining them together and returning the result such that the code that requests the rules for a given combination will not know the underlying schema has changed at all.

To migrate data to this new system, we will create a row for each column of each row of the current schema. That is, each row in issuingrules will become ~20 rows in the new table (for loanlength, fine, etc.). This is less than ideal, but we propose mitigation mechanisms below. 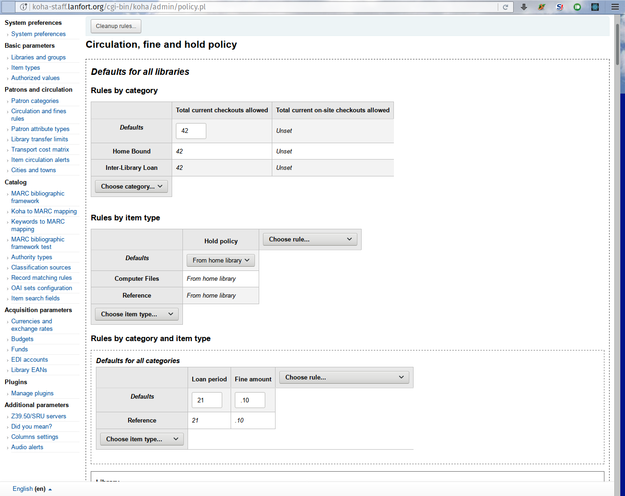 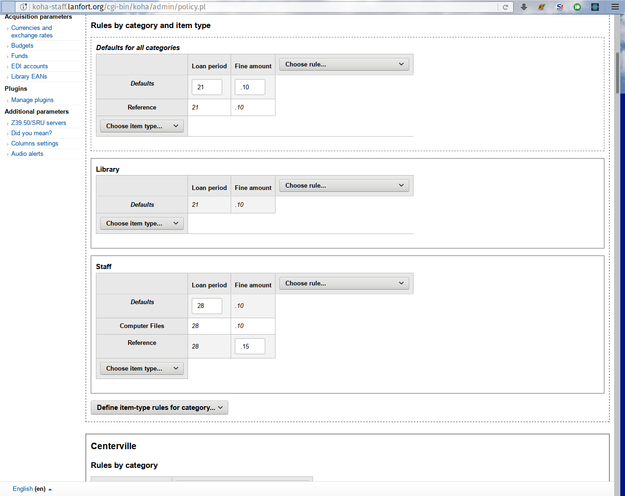 This interface is intended to clearly show the specificity order and show only the rules that have been defined and are relevant.

Also, note the "Cleanup rules..." button. This would bring up an interface that allowed a librarian to deduplicate rules (if several itemtypes had the same loan length, for example, it would suggest copying that loan length to a default rule). As each existing row in the issuingrules table will create a large number of rules, this will be critical for making the new interface usable.

To give librarians a very quick way to ascertain what rule will be used for a given library / patron / item combination, a rules overview page will be added which will display a table of combinations, the resultant rule values, what rule the value came from, and a link to quickly get to that rule in the editor.

In this mockup we have only 3 libraries, 2 patron types, and 2 item types defined: Mockup image

The simplify this a bit more, we could retain the library selector and show the rules per library rather than one encompassing table.